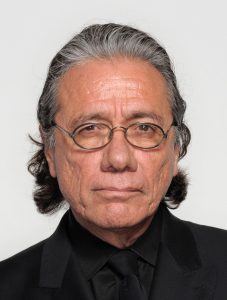 About the Mexican-American History Makers: Edward James Olmos is an American actor, director, producer and activist. Throughout his career, Olmos has established himself as one of the most influential voices of the Latino community in the United States. Olmos’s first major break came in 1978 when he landed a leading role in the Los Angeles production of Luis Valdez’s “Zoot Suit.” He continued taking on meaningful roles for the next decade when, in 1988, Olmos became the first Mexican-American actor to receive a Best Actor Academy Award nomination for his performance in “Stand and Deliver.” Some of Olmos’s other notable roles were in “Miami Vice,” “Battlestar Galactica,” “Blade Runner,” and “Selena.” On top of his acting career, Olmos is an activist with a deep commitment to the Latino community. Olmos has always been a strong advocate for Latino visibility, often using his public image to call attention to inequality and civil rights issues. In 1998, Olmos founded Latino Public Broadcasting and currently serves as its Chairman. The Latino Public Broadcasting funds programming for public television which focuses on issues affecting Hispanic-Americans and advocates for diverse perspectives in public television. He has also been an international ambassador for UNICEF.