For over 100 years, Hollywood has erased Mexican-Americans from American life — millions of American citizens were erased, like they did not exist — or chosen to represent them with distorted, offensive and false narratives, making Mexican-Americans less marketable in Hollywood. Hollywood’s executives have for too long only been interested in Mexican-American actors or filmmakers when drug cartels, gangs, maids or illegals are involved.

Hollywood continues to minimize our value, so we must take matter into our own hands.

The Mexican-American Film and Television Festival & Awards mission is designed to provide Mexican-American/Chicano filmmakers, who represent 40 million Americans of Mexican decent, a venue to showcase, promote and celebrate their beautiful art. It is a place that gives movie goers the opportunity to view dozens of films, short films and television pilots, both in person and online, depicting their beautiful people, stories and culture the way they want to see it, away from the stereotypical Hollywood portrait. These films and television shows are made by the best U.S.-based Mexican-American/Chicano filmmakers and actors, who understand our unique culture and journey in America and tell authentic stories. It is an opportunity to meet and ask questions for the filmmakers.

It is a place for the Mexican-American/Chicano filmmaking community to network, honor each other, and support and promote each other; a place for Hollywood to see our best filmmakers, as well as talented newcomers, and learn how we Mexican-Americans want our unique culture and people to be represented, as an important part of the American fabric instead of the old stereotypical images.

To maintain high-quality films and television, projects submitted will be judged by some of the most experienced and successful Mexican-American filmmakers and critics. 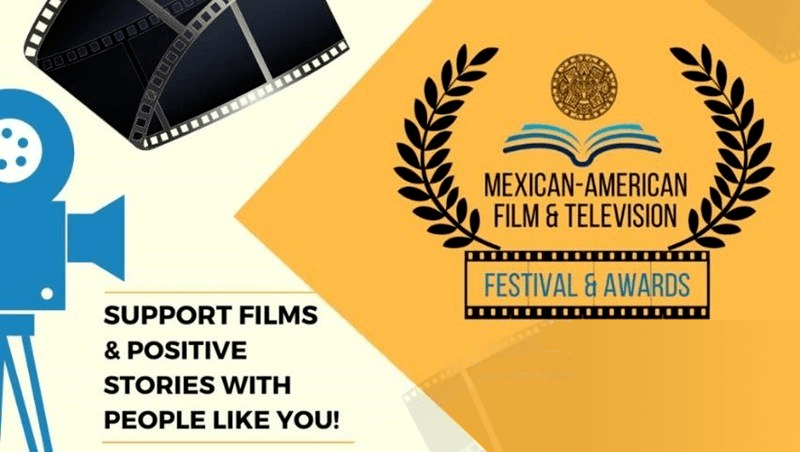 The Mexican-American Film and Television Festival & Awards will be a first-class, star-studded red carpet event to celebrate and promote Mexican-American/Chicano films, television, celebrities and filmmakers, a place to be seen by some of the major players in the industry and influential leaders. On the final day, the festival will have its Award Ceremony, with eight categories that will receive “Mexican-American Illustrious Awards” in honor of our illustrious Mexican cultural heritage. One notoriously stereotypical scene in a movie or TV show will also receive the “La Clancla Award,” which denounces tired old stereotypical depictions of Mexican-Americans/Chicanas/os.

This will be a night of celebration.

Criteria for Selection: Filmmakers of any ethnicity with high quality, positive and non-stereotypical Mexican-American/Chicana/o characters or stories are encourage to submit. The primary language of the Films should be English, though any amount of Spanish is ok. It is required that at least one lead character and one primary producer or director be Mexican-American. Stories with universal appeal are most desirable. Documentaries are not accepted at this time.

We are accepting high quality short films, feature films, television and streaming content that demonstrates a more accurate, non-stereotypical depiction of Mexican-Americans, helping educate the community at large about the true history and contribution of Mexicans in America, as well as promoting films made by Mexican-Americans/Chicanas/os with positive and true-to-life stories showing Mexican-Americans as a valuable part of American society!

Films and television shows submitted will be judged and selected for screening and awards by some of the most experienced and successful Mexican-American filmmakers and critics.

Other MACEF Initiatives To Help the Mexican-American Film Communtiy

$60,000 scholarship tuition is available each year from 2021 to 2023 to filmmakers accepted to the prestigious American Film Institute. Tuition money will be managed and distributed by AFI.

$60,000 scholarship tuition is available each year from 2022 to 2024 to filmmakers accepted to the prestigious UCLA School of Theater, Film and Television. Tuition money will be managed and distributed by UCLA TFT.

$20,000 scholarship tuition is available in 2021 to filmmakers enrolled in the prestigious UCLA School of Theater, Film and Television.

Our purpose is to further the education of aspiring filmmakers who want to enter the film and television industry by providing monetary support to film and television institutions and providing mentorships working with Mexican-American industry professionals. This program is open to any individual who lives in the United States and self-identifies as Mexican-American or Chicana/o of any generation or mixed ethnicity. Applicants will be assessed on grades, experience, demonstrable skills and financial needs. Our film students will have a benefit of $120,000 in tuition support every year for the next three years. We are looking to greatly expand this program.

The Filmmaker Grant is for those individuals already in the industry who need funds to finish their short film, film or TV pilot before putting it on the market. Film school students working on their thesis film are encouraged to apply. The applicant to this grant can be of any background, but the production team must include at least one producer, writer, director and main actor who identifies as Mexican-American or Chicana/o of any generation or mixed ethnicity. Grantees will have their film highlighted at the next Mexican-American Film and Television Festival.

To qualify for this grant, the applicant must submit the script of the short film, film or TV pilot, and be in the advanced stages of preproduction or production. Qualifying films will be assessed by the quality of the story (culturally positive and non-stereotypical stories are required) as well as the production organization and viability of the project.

Submission
Applications for the MACEF Filmmaker Grant will be accepted between April 1 and June 15. Those chosen to receive the grant will be announced on July 15, and the award amount will be dispersed at the August 2021 MACEF Reception. Grantees must present their film at the next Mexican-American Film and Television Festival. The finished project will display a credit to MACEF, including the logo on the credit section of the film.

Jerry Velasco Presiding Judge of the First Mexican-American Film and Television Festival, in charge of judging the film and television entries to receive awards

The UCLA Hollywood Diversity Report 2020 shows that film screenplay writers are 89% white, 5.2% Black, 3.0% Asian and 0.7% Latino, and that directors are 84% white, 5.5% Black, 3.4% Asian and 2.7% Latino. The USC Annenberg Inclusion Report 2021 reviewed 126 films and 180 series produced by Netflix in 2018 and 2019, showing great improvement in gender and racial equality with most minorities. Latinos were one of the exceptions, as only 2.6% of all stories had a Latinx lead or co-lead, with similarly low numbers behind the camera.

Historical Racism and Intentional Stereotyping Against Mexican-Americans in Hollywood.

Even in stories where Mexican-American war heroes are featured, as in the film “Hell To Eternity” (1960), Anglo-American actors have portrayed their bravery and never mentioned their Mexican heritage. The perception of Mexicans and Mexican-Americans in the U.S. is distorted, and the media has played a large part in this, largely portraying Mexican-Americans through degrading stereotypes, such as bandidos, criminals, the help, lazy, illegal invaders and uneducated. Recently, those in political power, including Donald Trump, have legitimized these Mexican-American stereotypes into the American consciousness, with disastrous consequences seen throughout the news. No other Latino group has endured such abuse.