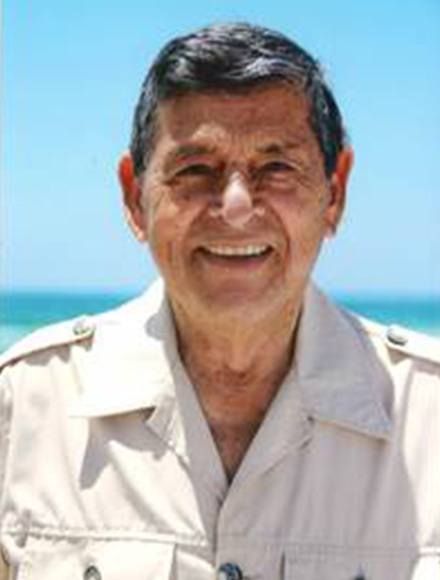 About the Mexican-American History Makers: Julian Nava was born in Los Angeles, California, to Mexican immigrants in 1927, and was one of eight siblings. Nava grew up in the barrio of East L.A. In 1945, he volunteered for the Air Corps of the United States Navy. Nava, along with other “Rough Riders” who had volunteered for the Armed Forces, was allowed to wear his Navy uniform for the Roosevelt High School graduation ceremony in 1945. Upon his return to Los Angeles, Nava studied at East Los Angeles Community College before transferring to Pomona College, one of the prestigious Claremont Colleges. After earning his undergraduate degree in history in 1951, Nava earned a Ph.D in Latin American history from Harvard University in 1955. He taught in Venezuela, Spain, Puerto Rico, and Colombia, where he founded Centro de Estudios Universitarios in Bogota. From 1957-2000, Nava was Professor of History at California State University, Northridge (CSUN). He is now Professor Emeritus of History.

In 1967, the Congress of Mexican American Unity (ninety-two community groups) nominated him to run for the Los Angeles Unified School District Board of Education. Nava became the first Mexican-American to serve on the county-wide board (composed of thirteen cities including Los Angeles). He was elected to three consecutive terms, from 1967-1979.

In 1980, he was appointed U.S. Ambassador to Mexico by President Jimmy Carter. He was the first Mexican-American to hold the position.

In 1992, he ran for mayor of Los Angeles. In 1993, Nava was a pallbearer at the funeral of the labor leader Cesar Chavez. Nava had worked with Chavez since his time with the Community Service Organization in Los Angeles immediately after the Second World War.

In the 2006 HBO film Walkout, the role of Dr. Julian Nava was played by director Edward James Olmos. Independently, Nava has produced several documentary films. He explores the history of the Basque people in “Song of the Basque,” funded by the Basque government. He then produced and co-directed “Voices of Cuba” with Todd Mattox. More recently, Nava produced a documentary on cross-border migration to and from the United States in two languages, “Zacatecanos de ida y vuelta” (Roundtrip Zacatecanos). Nava greatly enjoys travel, and has visited Mexico, Venezuela, Argentina, Spain, Great Britain, Russia, China and Tibet.

Today, he is retired and lives in San Diego County with his wife, Patricia. He holds the title of Professor Emeritus of History at CSUN. Nava lectures widely about multicultural education, and serves on the board of directors of Encuentros, which promotes education among young Latino males. In 2011, a LAUSD school was named after him — the Dr. Julian Nava Learning Academy. In 2014, another LAUSD school was named after him — the Nava College Preparatory Academy. In 2015, Nava published an historical novel, Taming the Chinese Dragon: Young Love in Changing Tibet.